Exodus is about repentance, redemption and restoration, from the wilderness to the Garden. Much of this album came about by recycling vocals and instrumentation from previous songs to create new songs yet retaining elements of the old, thus following the pattern of both spiritual and physical restoration.

Also known as the ‘camp fire’ album, there is an organic feel due to the comradery and freedom of expression from those at Anamchara Ministries and a community of friends who were willing to take part in recording different elements, sometimes in unconventional places, all done with a joyful spirit.

This is a story of purity, hope and happiness. It’s about the continuous cry of God’s people from this current wilderness, with a fervent desire to turn back to Him, from idolatry. Through His Chesed (loving kindness) and His forgiveness, He helps his people to become better image bearers for Him, taking on His character and carrying out acts of justice and righteousness, which in turn perpetuates the beautiful restoration of His Kingdom on earth.

The first song on the album “Exodus” is a vision of the Children of Israel and the sojourners walking slowly out of Egypt with all their belongings, livestock, through rain and shine, singing and praising HaShem (God). This also represents the vision of our current Exodus as we daily choose Kingdom over empire.

Saying Shalom Chaverim, isn’t just saying hello or goodbye, it is wishing our friends well, in a way that brings peace, and blessings, into their lives and the lives of others.

Song 2: Cry Out – includes part of a Hebrew prayer

Blessed are you LORD our God, King of the Universe

Special thanks to everyone at Anamchara Ministries and the community of friends and artists who contributed to the making and completion of this album with a joyful spirit and a willing heart. Thanks also for the love and support of Sue and Leo Ellis.

Thanks to Allen Larsen and Lindsay Hough for musical direction at a poignant time and TJ Bechill NEAT Audio for his kindness and help.

It took a village to make this album… 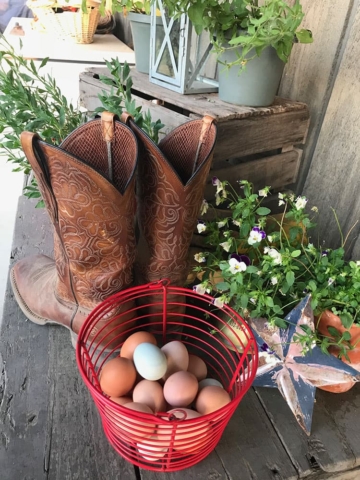 Every element of the CD artwork relates to the concept of Exodus, the plagues, the wilderness wandering, the desert and natural elements that God has created and uses to build His Kingdom.

The star of Bethlehem flowers on the cover artwork embrace a meaning of purity, hope and happiness.  These were chosen for the cover by Henta after Caoimhe gave her a small handful of them and she immediately felt they had a strong significance in relation to the album.

Cedar wood has significance as it was the reason that God used to bring Henta to the monastery in 2013, due to a cedar allergy (untreated cedar) in her previous location.

Cedar trees were not only the tree of choice for strength, beauty, and durability, but they were also used in Scripture to picture royalty.

Blue Topaz – stone found in the foundation of the New Jerusalem, can signify the colour of HaShem. This piece was part of a gift from Henta’s Mother from Ireland Jeweller’s in Cle Elum

Grasshopper – renamed “Unihopper” on account of only having one antenna was photographed at the monastery in the front yard during the Covid summer of 2020.  Whilst he was amongst the 10 Egyptian plagues, and a thankful reminder that God’s people were delivered from this plague he is also holding a spear to remind us to put on the full amour of God. A Grasshopper’s ability to connect and understand sound vibrations is why he is also a symbol of one’s inner voice which can come from the Ruach, ie wisdom.

Dalia – Dalyah is the Hebrew (דַּלְיָה) word for “flowering branch”, such as the tip of a grapevine or olive branch. The dahlia flowers typically symbolize dignity and elegance, but also eternal commitment, which also signifies life through Yeshua, in HaShem’s (God’s) eternal kingdom.

Chicory – sprung up one day at the monastery during the isolation period and was a source of great joy every morning when it flowered. It is also considered a bitter herb in Egypt and another reminder, particular during the Passover of deliverance, as a precursor to the celebration of a better life.

Umbelliferae seed head – extract from the Garden of Delight

“Particular details, the umbels embellish
like the color, the care, or the purpose—
amplifying the Lord’s instruction,
testing people to trust His promise…..”